In this entry we take a look at some really unusual watches! And if you want to stand out from the crowd with a unique watch that says it all, then you might want to take a look at these...telling the time will never be the same again! 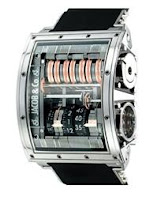 Bizarre, yet beautiful! Made in the style of a 60’s cassette player, the limited edition Jacob & Co. watch seems as if it’s been brought back from an age that knew of no limits! The Quenttin does everything you’d expect from a watch, and has no other special abilities apart from displaying the time on vertical rolls powered by a tiny engine. Although the bezel and cage are made from a choice of White, Rose Gold or Platinum, the Quenttin will mostly be remembered for its weird characteristics; which could very well be described as those of a mechanism James Bond uses to deciphers passwords and unlock doors! 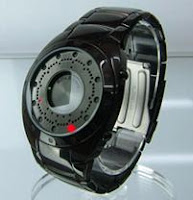 138 LED’s in a watch! Some say that if you see this watch from a distance in the dark, you will think it’s a flying causer, but don’t run away! The brightly colored lights are only the 138 LED’s built into the watch, which indicate the time, day, month and year! This watch from Solsuno is definitely not average, but reading the time might take some time getting used to since each little LED represent a different function.

The world’s first electronic paper watch! What makes this watch so unusual is the display! It’s not LED, nor is it TFT, but a microcapsule electrophoretic display which consists of pure white and black particles! Developed by Seiko Watch Company and Seiko Epson, the watch has a large screen with twice the clarity of a normal LCD! It is believed that only a couple of hundred watches were made, which means that you’ll be able to wear something truly unique! 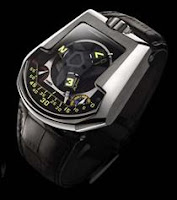 Anything is possible! If you ever see an advert for a watch that says it has some of the most unique features, don’t believe it, it’s not a Hammerhead 201! Recently launched by Urwerk, the Hammerhead 201 is easily the oddest looking watch out there, but certainly one of the watches with the most unique functions! Some of the features include hour satellites, but adds in telescopic minute hands that adjust their lengths as they follow the minutes and then retract. On the back of the watch there’s an oil change indicator, and also the world’s first horological odometer which keeps track of the total time of use for over a 100 years!
Posted by Rockerfella02 at 8:56 AM
Email ThisBlogThis!Share to TwitterShare to FacebookShare to Pinterest
Labels: Clothing accessories, Gifts for the Girls, Toys for the Boys

I love it when you can see the internal mechanics of a wind up watch.... it really is very beautiful. So different from just a battery and a circuitboard.