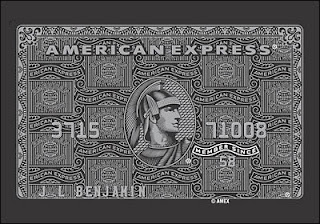 In the words of my father: “To be successful, you have to visualize success now”. No other picture does this better than the one left.

My Branding Communications lecturer told us that to him the BMW brand symbolizes “Going Places” and Mercedes symbolizes… “You’ve arrived”. Granted it was 2003 and she had not seen the new2006 X5! (But that is another future posting). Nothing symbolizes “You’ve arrived” better than the black Centurion Card from American Express.

So, when I visualize success, I see myself do what so many celebrities like to do: Whip it out to stun unexpected onlookers. Only the top 10,000 American Express clients could qualify for all the associated benefits of the card:

No predetermined spending limit
Airport Club Access – At airlines like Delta, Continental, Virgin Atlantic, and US Airways. And includes one night free at a Mandarin Oriental Hotel.
A VIP Concierge Service at hotels, airports and spas.

The card could literally be used to buy your new Rolls Royce at the swipe of the card. Retailers would swoon at the mere sight of it and they will let you date their daughter just to get you to use in abundance at their shop. Celebrities loves to flaunt it, executives makes damn sure their friends at the country club sees it and the ladies loves to tell their mothers that their man has got one… It actually buys the approval of you mother-in-law.
Posted by Rockerfella02 at 12:53 PM 5 comments: Links to this post
Email ThisBlogThis!Share to TwitterShare to FacebookShare to Pinterest
Labels: Black Card, Celebrities, Fantasy Spending, Little Luxuries, Success Story

So I love my golf; nothing beats spending a 4 hours on a beautiful green course, trying to beat my personal best. I only resently broke 90 and am trying to break 85. You know what they say: "There is only one thing better that breaking 85... and that is breaking 75!"

But sitting in Manhattan for a couple of months, I gettin' out of shape... golf shape that is. So I mentioned this to the native NY, account exec at the company and he took me to Drive 495.

Drive 495 is a golf fitness gym in the heart of Soho. The club consists of two floors, the bottom you'll find a fully equiped fitness studio with cardio and weight areas and the top loft consits of a golf studio. Here you can exersize the body and sharpen you shot in front of virtual driving ranges.

Appatently you can play a full similated course to sharpen your skills with each club. Play St

I enjoyed the experience (did not join, but was tempted), but I still enjoy the real thing. I cannot wait to return to NV to play my favourite courses! BUT when in Rome... vitually escape it!
Posted by Rockerfella02 at 6:48 AM 1 comment: Links to this post
Email ThisBlogThis!Share to TwitterShare to FacebookShare to Pinterest
Labels: Catherine Zeta-Jones, Donald Trump, Fitness and Health, Golf, Hugh Grant, Little Luxuries, Michael Douglas, Sylvester Stallone, Toys for the Boys

Clive Christian no1 - Most Expensive Perfume in the World 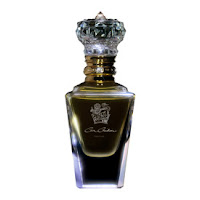 So my girlfriend is my blog's biggest fan, and she loves to alert me of stuff that's relevant as content. So she dragged me into Saks Fifth Avenue the other day to show me the latest fashion trends for all my female readers (She was my editor for the Celebrity Sunglasses and Designer Jeans articles).

I must say she made it intresting for me, but my interest were mst peaked when she showed me a bottle of the world's most expensive production perfume on the market: Clive Christian No1 for Woman. 1oz costs a whopping $2,350!

So she admitted to me: She would forgive me for almost anything if I buy her this bottle... She got roses from me later that day... :)
Posted by Rockerfella02 at 6:03 AM 1 comment: Links to this post
Email ThisBlogThis!Share to TwitterShare to FacebookShare to Pinterest
Labels: Clothing accessories, Gifts for the Girls, Most Expensive

A Few quality artcles for your perusal...

"Young Affluents" Are The Future Of The Luxury Market - Luxist 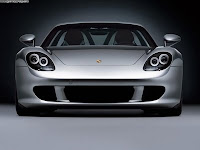 Pictured: Porsche Carrera GT, taken from the article Maserati MC12 vs Porsche Carrera GT vs Mercedes McLaren SLR.
Posted by Rockerfella02 at 5:22 AM No comments: Links to this post
Email ThisBlogThis!Share to TwitterShare to FacebookShare to Pinterest
Labels: Aviation, Cars, Clothing accessories, Fantasy Spending, Gifts for the Girls, Porsche, Private Jet, Technology, Toys for the Boys

It should not come as a surprise that I follow the Forbes anual Billionaires' list very closely. I follow the success stories of the people on the list and love to see how the list changes year-after-year. 2007 however, came as a huge shock to me: There are so many new faces to the top 10 and gone are some of the familiar ones.

Out of contention are the Waltons (Wal-Mart). The late Sam Walton's estate is being enjoyed by his wife and children; however they are not able to keep abreast with the onslaught of the new entrepreneurs on the list. Gone is our favouite Russian billionaire, Roman Abramovich: He is going through the world's most expensive divorce!

The biggest winner on the list is Amancio Ortega who came from nowhere to land in the 8th position. Last year he did not even make the top 50! The Lucky S-O-B award this year goes David Thompson who makes his debut to the Forbes list on #10. Read his entry to see why this is a success none the less.

No surprise here. He is still the Richest Man in the world. What is interesting though, is that the bulk of his investments are not in the Microsoft Corporation anymore! He and his wife spends the bulk of there time doing
charitable work.

One thing that I like about the top 3 Richest people in the world, is there willingness to donate money to good causes. Warren Buffett donates to Bill Gates' charity fund while Carlos Slim Helu donated $4 Billion to upliftment causes in his native Mexico. His empire has grown n the last year. Telecommunications is still one of the most lucrative industries to be in.

The cheapo on the list. He loves to lead a very modest life; furnishing his houses with furniture from his stores and still driving his old 1988 Volvo station wagon. Live a little Ingvar. Read my blog and get a couple ideas what to spend those Billions on!

Magnate, Tycoon, Monopolist. These are three words that describe Mittal. He absolutely controls the world's steel industy. I think I should do an entry on his house in London; it's splendour is inspiring.

Country: US
Industry: Entertainment and conferencing

The ugliest man on the list! Yet, my absolute favourite. His story is very inspiring. He made his fortune through being a very good middle man. He started off by renting conference space $5 per square foot and renting it out for $200 per square foot. Simple and effective with huge profit margins. Click on the link and read his story. I'm inspired every time I read it. He loves to break the mould and build new business rules. Just read what he did in Las Vegas.

The growing demand for luxury labels has got Arnault smiling all the way to the bank. With more than 3 million US $ millionaires in the world, Arnault has perfected the art of targeting the fairer sex of this group. And he just loves acquiring more fashion houses.

As a student I dreamt of making my fortune in the same way as Ortega: Apparel. I still think it's a good business idea. Get a company that manufactures bags (as an example), and brand them with other people's non-clothing brands. When you buy an Aston Martin, you get a branded bag with it... who manufactured that bag? It's better to use established brands than start creating brand awareness for a new one.

This is kinda how Ortega made his fortune. His debut in the top 50 and it's in position number 8!

Commodities are a lucrative business, but getting in it is a b**ch. Ka-shing does not have the business ingenuity that the other on the list have, but he is probably the best leader of the bunch. More people work for him than any other on the list. To make money in commodities takes leadership: Working with and relying on Blue-collared employees to make the business work.

Kenneth Thompson never made the top 10: He died before the honor could be bestowed upon him. Instead his son, David made his debut in the number 10 position. David took the reigns of Thompson Corp in 2006, after the death of his father. His personal and inherited wealth pushed him into the top 10. He is the first Canadian, which I know off that ever made it to the top 10. I would love to see if he could take the family owned company and increase his position in 2008.