I regret not having reporting on James Packer before. Of all the richest men of a specific country, Australia’s former Richest Man used to be one of my favourites. Just look at this guy: If you see him, you would think he’s the bodyguard to a billionaire, not one himself. 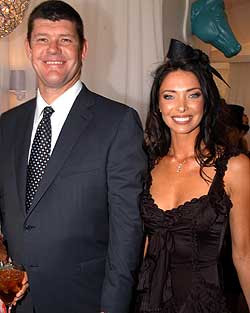 James Packer inherited his roughly $5 Billion fortune from his father, Kerry Packer who passed away in 2005. In Aussie Billionaire-style, the Packer empire comprises of a media and entertainment empire. James took over from his father and become one of the youngest billionaires in the world. He recently made headlines with allegations of acts fraud in his company, but direct links to him and his management was never proven.

Today James Packer has his sights squared on Las Vegas and Macau (China’s Las Vegas). He was reported to looking at buying a $1.8 Billion stake in one of the Vegas Strip’s most popular Casinos.

But… today the news came that Andrew Forrest (left), billionaire founder of Fortesque Metals Group Ltd have been reported to pass Packer as the Land Down-Under’s Richest Man. According to a West-Australian Newspaper, gains in Fortesque’s stock has yet again proved that Metals and Resource owning Billionaires are laughing harder to the bank than the Entertainment/ Internet/ Software Billionaires. Case in point: 2007 has been a great year for Lakshmi Mittal (Steel) and Carlos Slim (Mexican Resources and Telecommunication). Both Billionaires have made huge gains on traditional Richest men like Warren Buffett and Bill Gates.
Posted by Rockerfella02 at 2:37 AM 11 comments: Links to this post
Email ThisBlogThis!Share to TwitterShare to FacebookShare to Pinterest
Labels: Bill Gates, Billionaires, Carlos Slim Helu, James Packer, Lakshmi Mittal, Warren Buffet

This is still one of my fav two subjects: Billionaires and their beautiful daughters. My previous post on this subject was extremely popular, so I have decided to highlight a few more “daughters-of –Inheritance”.

Forbes brought out their The 20 Most Intriguing Billionaire Heiresses – list. From this list, here is one lady that really got my attention: Marta Ortega Perez.

Marta is the daughter of Amancio Ortega, the Spanish Billionaire worth $24 Billion. Marta is currently being groomed to take over her father’s fashion empire with it’s prized jewel; the Zara Retail chain. 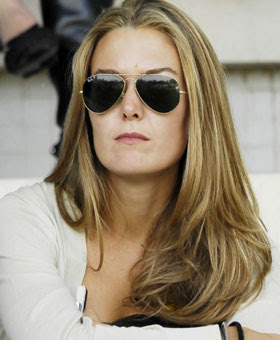 As with so many of the Billionaire Heiresses, Marta too is a passionate equestrian, but that is where the privileges end for her. She has to work her way up in the company… just like any other employee. She reportedly started in the Zara stores by restocking the shelves. Today she is in the company’s Marketing department.

I like that about her
Posted by Rockerfella02 at 1:28 AM 3 comments: Links to this post
Email ThisBlogThis!Share to TwitterShare to FacebookShare to Pinterest
Labels: Amancio Ortega, Billionaires, Heiress, Marta Ortega-Perez

Jane Goody and our fav playboy prince, Prince Azim, got to know each other during the notorious Big Brother UK scandal that rocked the headlines earlier this year where Goody was accused of making racist remarks to famed Bollywood star Shipa Shetty. Goody and the Prince both shared the same opinion of the Bollywood star and made public statements to that extent. They have since met and became friends.

Apparently she refused the £3 million diamond ring when Prince Azim offered to her, but we all know that deep inside, she was going “Oh Goody!” 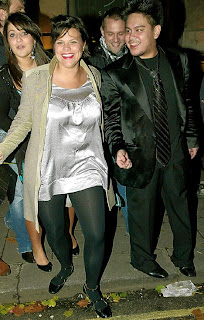 Lame joke, I know...
Posted by Rockerfella02 at 12:37 AM 1 comment: Links to this post
Email ThisBlogThis!Share to TwitterShare to FacebookShare to Pinterest
Labels: Gifts for the Girls, Prince Azim of Brunei, Rich Kids
Newer Posts Older Posts Home
Subscribe to: Posts (Atom)