The answer is Lakshmi Mittal, the Indian steel tycoon and the world’s fifth richest billionaire. His London residence at 18-19 Kensington Palace Gardens was bought from Formula One Boss Bernie Ecclestone in 2004 for a staggering $114.89 million (£62.7 million). And for while the house held the Guinness World Record for the world’s most expensive house. The Mittal/ Ecclestone deal still hold the record as the biggest of its kind. 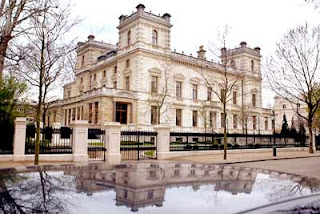 Another interesting fact: Prince Talal Bin Waleed's palace racked up a construction bill of over $200 million when it was build in the late 80’s. But the palace belongs to his country and not to him per se, so his residence cannot be counted as a “private residential house”.
Posted by Rockerfella02 at 7:38 AM
Email ThisBlogThis!Share to TwitterShare to FacebookShare to Pinterest
Labels: Billionaires, Donald Trump, Lakshmi Mittal, Most Expensive, Prince Talal Bin Waleed, Real Estate, Updown Court

Hi, I just came across your blog and like it a lot. Thank you for the information. I had an updated list of most expensive real estate properties here. You might want to visit them.

I think the guys are more richer.