Maybach vs Bentley vs Rolls Royce - Which one do you want to be cheuffeured in?

I'm not going to give an in-depth article today, instead, I will supply you with pictures of the three ultimate luxury car brands, Bentley, Maybach and Rolls Royce. I will do an in-depth article about one of them, based on which one gets the most votes by next Sunday.
YOU TELL ME...
Which Car Manufactuer makes the ultimate luxury car to be chauffeured in?
A. Bentley
B. Maybach
C. Rolls Royce
Vote by leaving a comment 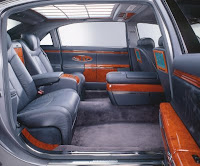 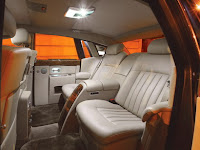 Posted by Rockerfella02 at 1:34 AM
Email ThisBlogThis!Share to TwitterShare to FacebookShare to Pinterest
Labels: Bentley, Cars, Maybach, Rolls Royce, Toys for the Boys

It is a close tie between Bentley Arnage and Rolls Royce Phantom. Mybach shouldn't even be mentioned next to the two - it is juut a glorified "merc"

Having grown up with Rolly Pollys and Bentleys I must say it's hard to choose. The Rolls is good for the ten hour drive to the coast and the Bentley is superb for weddings and matric dances. Thy both have my vote actually!

Put me down for both - thank you.

The rolls because has nicest back seat and the soothes ride. When I was in china, the hotel I was staying at pick us up at the airport. Sadly that is Perhaps my last time to see the back seat of a rolls

I think the exterior of the Arnage is the best looking, I also like its open space in the back (in comparison to the Phantom which appears smaller due to the central division.
The Interior quality looks great on both the Rolls & Bentley, the Mybach is just hideous, however those reclining seats would be fantastic on a trip to the south of France.
I would walk into the show room heading for the Rolls Royce as it is the icon, the Rolex of the car world, however at the last minute I would veer of and buy the Bentley

Rolls-Royce, you can get the car the way you like it. The bespoke options are just amazing!!!

Cheers to the Phantom 5 LWB!!!

bentley is by far the best. it manages to be the most sporty, while also being the most classy.

the continental range is fabulous on the track, the maybach 57s/62s are definitely fast for their size, but have mediocre handling becuase of its size. rolls royce does not have much of a sports appeal to it, besides the drophead coupe if that really even counts.

bentley interiors are also superior. maybach's interiors are horrendous, they use cheap materials that are found in the s-class and very unreliable thanks to its mercedes roots. my neighbor has a 2006 maybach 57 that has an air conditioning fluid leak. the car is lightly driven and meticulously cared for and still it is leaking, just an overpriced s-class. the phantoms have very nice interiors, but the new style as seen in the phantom IV leaves the doors very plain and the dashboard messy.

i am biased though. as a bentley flying spur owner, i think it has the best mix of sport and luxury possible.

both the bentley's and maybach's also have bespoke options and endless customization possibilites.

It has to be the Maybach, and no its not a glorified Merc on the pure and simple fact that Maybach used to own design and manufacture Mercedes. Also growing up with Bentleys and Rolls the Mayback 67s of which we now have is an absolute rush to drive, and unlike the Bentley and rolls when the loud pedal has been stamped on you really feel the power.

I Would go for all the three. Maybach gives more status than a rolls or bently; on the other hand a rolls has a more commanding presence whilst the bentley is beautiful before the interior and exterior.

maybach 62s. without a shred of doubt. i mean you've basically got a lay-z-boy recliner in the rear. and V-12 power as well?! how can you say no to that??

Definitly the Maybach (its a shame they dont mention the best Maybach being the Exelero). The main reason for the Maybach is because of the superior status that comes along with owning one. The are far fewer Maybachs out there then Bentlys or Rolls Royces. When buying these things, you most likely aren't looking for what performs the best (but I do like the V12 in the Maybach 62S), you are looking to invest in a status symbol, not a high performance race car. Too many people are confusing luxury sedans with high performance sports cars.

I own all three, and the RR PHANTOM is the one to have. A class unto itself.