Audi A8L Protection - Safest luxury car that a civilian can buy? We think so

It is called a BRV (Bullet Resistant Vehicles) and they are as luxurious inside as they are safe.  They can withstand bullets, fire, explosions to a certain agree and should you come under attack; they have their own "communication boxes" that can pitch into back-up frequencies to ensure that you are rescued before you know it. Mercedes has one, BMW has a safer one, but now Audi is giving them a serious run for their ... niche market share! 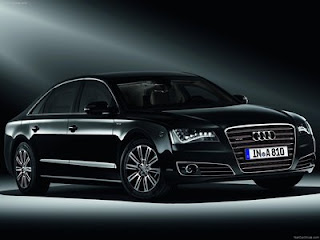 I was a big fan of the new Audi A8 when it came out two years ago and was amazed when they pinnacled their top of the line model when they introduced the "A8L" model.  Here was an Audi I would not mind being chauffeured in.  I must say, in the past the Audi A8 gave me the impression of a luxury vehicle that the executive could drive themselves, but it was just not a car that a dignitary would want to drive if they had equal opportunity to get the more chauffeur friendly Merc S-Class or Bentley Continental. This all has changed.
Audi, probably realized that they have a winner and that the dignitaries that like sitting in the back seat might need a more secure cabin.  As I write this, Egypt's revolt has just come to conclusion, but there are anti-government uprisings in Libya, Iran and Yemen.  Something tells me Audi has chosen the perfect time to launch an amoured "president-carrier!!"
Posted by Rockerfella02 at 10:53 PM
Email ThisBlogThis!Share to TwitterShare to FacebookShare to Pinterest
Labels: Audi, Little Luxuries

Audi seems to have really nice cars lately, but I still think that Mercedes is a stronger luxury brand.